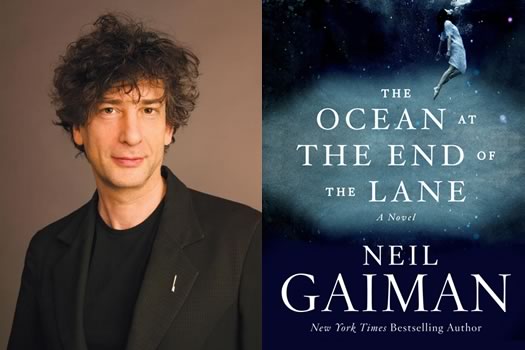 “Childhood memories are sometimes covered and obscured beneath the things that come later, like childhood toys forgotten at the bottom of a crammed adult closet, but they are never lost for good,” internalized our unnamed narrator five pages into the story.

And that is what The Ocean at the End of the Lane is all about – recollections of a childhood long forgotten.

Neil Gaiman‘s unnamed middle-aged narrator takes readers with him as he recalls events from his childhood. It all starts when he returns to his childhood hometown of Sussex, England for a funeral. He then finds himself driving down to the house at the end of the lane where he finds one of the Hempstock women who he thought to be his friend’s, Lettie’s mother but later turned out to be the Old Mrs. Hempstock, the grandmother. And as he sat by the small pond, the same pond Lettie called an ocean, the memories of the strange events when he was a 7-year old boy come rushing back to him.

Gaiman is a master of combining myth, fantasy and horror into one solid story. In American Gods, he took in a handful of pagan gods and put them into an Americana road trip. In Coraline, he created an utterly horrific world beyond a door. It is no wonder that he turned a simple 40-year old man’s recollections into something akin to the tales of the Brothers Grimm. It may have taken him eight years to come up with an adult novel but Gaiman never lost his touch. His narrative is more vivid than ever. Creating a balance between the real world and the magical realm is a hard task but Gaiman more than manages it. He is one of those few writers who can seamlessly go in and out of the imagined world within his story.

But even if it is similar to his previous works, there’s something that sets Ocean apart.

Neil Gaiman created a narrator that’s easy to relate with. His voice is clear, his experiences very much real. He was able to capture an essential part of the adult disenchantment and put it into his main character. A lot of times while reading the book I’ve imagined a 7-year old Neil Gaiman in place of the narrator. Well, I did read somewhere that he based some of the Ocean’s  protagonist’s qualities and experiences on his own childhood so I guess in a way it really is him there in the story.

The Ocean at the End of the Lane is beautifully written. More than it’s magic-filled pages, what made me love the story more is its humanity. Gaiman did not give his readers a story made up happy,everything-is-all-good characters. Instead, he gave us characters that are flawed but truthful. And even though the ending he gave us was anything but reassuring, it was closer to what happens in real life. It is open to so many possibilities.

Young readers and adults alike will surely enjoy The Ocean at the End of the Lane. It is definitely worth the eight-year wait.