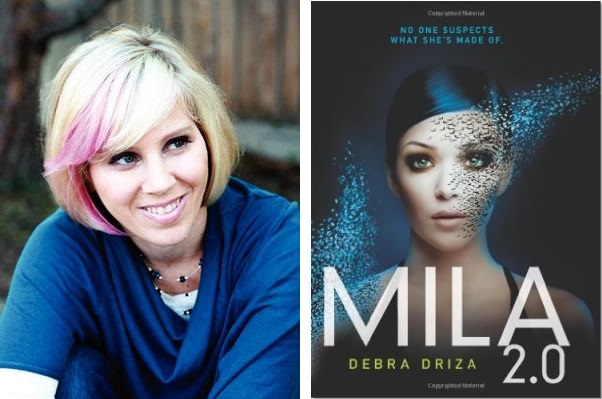 No one suspects what she’s made of.

Mila 2.0 is the first book in a planned trilogy by debut novelist Debra Driza. At the beginning of the story we find Mila, the main character, coping up with the after effects of the deadly fire which caused her and mother to move from Philadephia to Minnesota. The fire took his father’s life but that’s all she remembers. Mila can’t recall anything. Then a freak accident reveals to her things she wasn’t supposed to know. She’s an android built by the government as a weapon and she is supposed to be terminated.

Mila 2.0 is an action-packed read. At 400 plus pages, it is quite a long story but it is enjoyable enough for a reader to finish, well, at least for me that was the case.

As a whole, Debra Driza’s debut has its hits and misses. Characterization is first on my list. A character will be introduced, I got to know him a bit but then he disappears from the scene and I am left with Mila’s recollections of this character. That was the case with Hunter and some of Mila’s friends in the story, which is a bummer. It’s hard to connect and feel for a character you don’t know much about. It’s step one in building attachment.

Second, the main character is weak (and, yes, this deserves a whole paragraph to itself). I liked Mila in the first part of the book. She’s sweet, endearingly insecure and, basically, just a teen-aged girl trying to fit in. But her lovable traits start vanishing the moment she discovers that she isn’t human at all. Instead, she turned out to be this overly emotional android with human feelings for a good part of the book after the “discovery”. I know she is supposed to have feelings but it was just too much. She could have spent more time figuring how to get out of the mess she was in instead of wasting it on whining and crying.

The strong point of Mila 2.0 is its action. Driza describes the action scenes pretty well and that made me finish the book. It kept the story interesting enough though still not that unpredictable.

Overall, I enjoyed Mila 2.0 partly because this is the first YA sci-fi book I read and I really didn’t expect too much (something I do with every book I start, yes, even novels written by my favorite authors). It is good but it could have been better. Anyway, this is the first in three books so let’s give Mila a chance to grow up (how you do that when you’re an android, I don’t know). I’ll definitely get the second and third book once they are out.