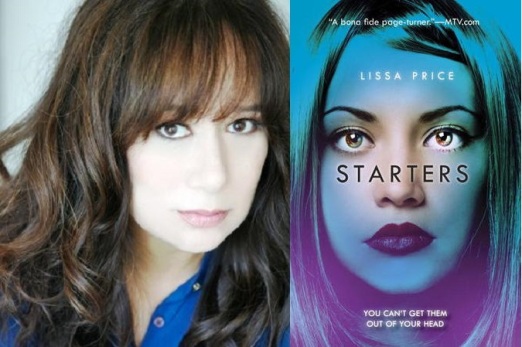 Callie Woodland‘s futuristic Los Angeles is filled with terrible chaos. The Spore Wars killed everyone between the ages of twenty and sixty leaving  the very young, the Starters and the very old, the Enders. Orphaned, Callie must fend and provide for herself and her sickly brother Tyler, and she does just that with some help from former neighbor and fellow orphan Michael. But times become more dire as Tyler’s illness progress for worse. Callie must make hard decisions which eventually led her to Prime Destinations also known as the body bank.

If you’re a moneyed Ender, you go to Prime Destinations to relive being young but if you’re an unclaimed Starter, you go there to temporarily sign off your body for someone else to use and claim in exchange for money.

Desperate, Callie goes to Prime Destinations and becomes one of their body donors. She’s scrubbed and remade, and fitted with a neurochip in her head to enable the renter to control her body. Her first two rentals went well but just when she thought things are going to go smoothly her third and final one goes awry. A week into her supposedly month-long rental, Callie wakes up inside a bar which she knows is entirely wrong. Then she starts hearing a voice inside her head, the voice of the Ender renting her body, warning her not to go back to the body bank. Fearing that Prime may not pay her if they learn about the glitch in her chip, she abides but soon she realizes that her renter has plans of her own and that everything and everyone else around her isn’t what they seem to be. Callie knows she must do something.

Starters is the first book in Lissa Price‘s two-part installment, and for a debut novel it is a good one. It is a fast-paced thriller of a book. Things just keep on happening one after the other. Callie, the protagonist, is likeable and the world she lives is something you wouldn’t want to live in.

Although labeled as a dystopian novel, Starters lean more towards science fiction. I found the whole body renting process interesting. Imagine being fitted with a neurochip in your brain. Imagine your body being controlled by some other person. It’s a fascinating and scary feat both at the same time. Something that can totally happen especially given our advancement in science. (I’ve recently read something about an experiment where one person was able to control another just by thinking what he wants the other person to do.)

The world of Starters is also another thing I like. It’s genuinely scary and very possible. It’s loop-sided in a very sick way. Teens, the Starters become second class citizens stripped off of their rights while the Enders enjoy limitless resources. It’s a vivid illustration of the powerful preying on the helpless with the Starters as the bullied, weaker side and the Enders playing bully. Because of their unfair circumstances, you just can’t help but to root for the Starters.

The novel is at its best when Callie’s stumbling through the truth behind her renter, her motives, Prime Destinations and the government. She’s a smart girl who can piece together the facts she gathers and ultimately does the right thing at the end of the story, which is to shoot down the establishment.

Another thing I like about this novel is its antihero. The Old Man is a formidable opponent – mysterious, powerful, omnipresent. He’s creepy with a capital C. You can keep on guessing what he’ll do next all you want but really he’s unpredictable which makes him dangerous and exciting.

However, Starters it is not without flaws. The love triangle being drawn between Callie, Michael and Blake feels half-hearted and half-baked. Every time the narrative focuses on their relationship, it slows down which ruins the pace of the story.  I just can’t seem to connect with it. Also, there were plot holes that are really noticeable like Callie’s renter, Helena’s will. There’s also that sub-plot which involves Helena’s missing granddaughter but I guess that’s for us to find out in the next book.

Overall, Starters is an enjoyable fast read. It’s a book you’ll keep on reading not minding the time you spend on it. I will definitely get the next book Enders come January 2014.

If you want to know more about the last book in the series, Enders, watch the clip below. Author Lissa Price (@lissa_price) talks about it.