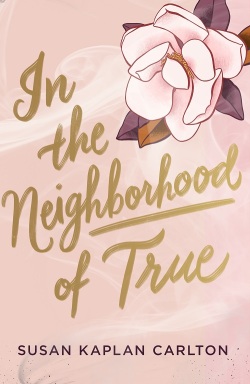 ARC provided by the publisher in exchange for an honest opinion. Thank you goes out to Algonquin Young Readers for inviting me to be part of the In the Neighborhood of True blog tour.

Thought-provoking and relevant, Susan Kaplan Carlton tells the story of one girl caught between two worlds in her newest release In the Neighborhood of True.

After her father’s death, Ruth Robb and her family transplant themselves in the summer of 1958 from New York to Atlanta – the land of debutantes, sweet tea, and the Ku Klux Klan. In her new hometown, Ruth quickly figures out she can be Jewish or she can be popular, but she can’t be both. Eager to fit in with the blond girls in the “pastel posse,” Ruth decides to hide her religion. Before she knows it, she is falling for the handsome and charming Davis and sipping Cokes with him and his friends at the all-white, all-Christian Club.

Does it matter that Ruth’s mother makes her attend services at the local synagogue every week? Not as long as nobody outside her family knows the truth. At temple, Ruth meets Max , who is serious and intense about the fight for socia justice, and now he is caught in between two worlds, two religions, and two boys. But when a violent hate crime brings the different parts of Ruth’s life into sharp conflict, she will have to choose between all she’s come to love about her new life and standing up for what she believes.

61 years – that is the amount of time in between 2019 and 1958. But even with six decades separating then and now the events of 1958 still resonate, ripple down our today.

I don’t know what that says about us as human beings, about our ineptitude and willful ignorance, repeating all our past mistakes over and over again.

Loosely inspired by the October 1958 bombing of the Hebrew Benevolent Congregation, Atlanta’s oldest synagogue, Susan Kaplan Carlton tackles racism, discrimination and identity in In the Neighborhood of True.

The story follows 16-year old Ruth Robb, who moves to Atlanta from New York after her father’s untimely death. Ruth quickly acculturates to her new home, embracing tea and etiquette lessons, pre-debutante balls and accepting inclusion into the “pastel posse” – a group of popular girls all from well-pedigreed, all-white, all-Christian families. Knowing that she wouldn’t be welcomed otherwise, Ruth hides her religion, her Sundays at the temple with her mother and younger sister in exchange for her new life, and for a while this works for her. But a violent hate crime smash together the two halves of her life and forces Ruth to choose between what she wants and what she believes is right.

In the Neighborhood of True was such as simple story of a young girl coming of age in a period of great change. This simplicity and uncomplicatedness, however, only made this book standout, giving me a snapshot of history and highlighting the message it wants to impart. Racism and discrimination are still topics very relevant to our lives in this day and age. These are topics, hurtful as they may, that we need to talk about.

Ruth, the focus of much of this story, was a well-developed character. Being once a teen myself, I understood her position and why she chose to hide part of herself to fit in with her new friends. She was a young girl still dealing with the pain and grief of losing her beloved father. I think she found comfort (and maybe some distraction) in being part of something that was so different from her old life in New York – a life where she had a living father and a complete family. Atlanta and its pre-debutante/debutante balls must have felt like a fresh start for her. In Ruth I saw bits of my younger sisters, and I felt for her, wanted her to be happy even as I cringe and roll me eyes at all the frippery she seem to genuinely love.

Ruth was believable – like a real-life teenage girl with flaws, someone who still have a lot of learning and growing up to do, and she lends the story a great amount of realism. The thing I appreciated the most, though, in the way Susan Kaplan Carlton wrote her was how she didn’t make out Ruth as a white savior. Instead, she had her called out several times like in that part when she told the pastel posse about Birdie’s, her grandparents’ black maid, daughters being in college the housekeeper took her aside and told her to not use her children to impress her friends. 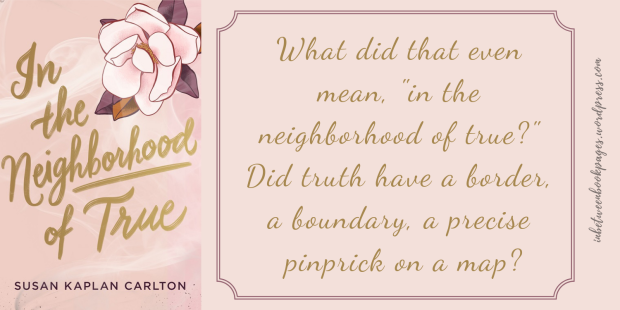 Susan Kaplan Carlton’s writing was, like the story she wanted to tell, simple, straightforward and on point. No fripperies for her at all, as opposed to her main character, and it made her story flow easily.

Still, there were a couple things that could have been done better. The secondary characters come to mind immediately. With the exception of Alice, Ruth’s mother, and Nattie, her younger sister, Carlton’s supporting cast felt one dimensional. They were there to play parts in relation to Ruth. I couldn’t imagine what their lives are, what they do when they are not with Ruth – and these are all signs that they aren’t as fleshed out as they could have been.

The blurb was also a bit misleading. Going in, I anticipated some sort of love triangle between Davis, Max and Ruth. Sure, there was a Davis and Ruth pairing and something with Max was alluded to, but other than that? Nil.

Overall, In the Neighborhood of True was a thoughtful read. I enjoyed it a whole lot, its flaws aside, and honestly feel like this should be a book that should be read by everyone. YA historical fiction fans, as well as YA contemporary lovers certainly will find something for themselves in this book.

Check out the link below to read the first chapter of In the Neighborhood of True.

In the Neighborhood of True – Chapter 1 | Susan Kaplan Carlton

SUSAN KAPLAN CARLTON currently teaches writing at Boston University. She is the author of the YA novels Love & Haight and Lobsterland Her writing has also appeared in Self, Elle, Mademoiselle, and Seventeen. She lived for a time with her family in Atlanta, where her daughters learned the finer point of etiquette from a little pink book and the power of social justice from their synagogue.

3 thoughts on “Review: “In the Neighborhood of True” by Susan Kaplan Carlton”

Boo 🩹
Shadows and light
Sunday reading
Scary sweets 👻💀😋
Slowing down this weekend 📖
I remind myself of this every single day.