ARC access provided by the publisher through NetGalley as part of the Fantastic Flying Book Club’s blog tour. All opinions expressed are my own.

One teen-aged girl’s quest to find her missing sister uncovers more than she expects. Family secrets and curses, and a country’s unspoken history fuel this brutally emotional contemporary by Moïra Fowley-Doyle.

When Deena’s wild and mysterious sister Mandy disappears – presumed dead – her family are heartbroken. But Mandy has always been troubled. It’s just another bad thing to happen to Deena’s family. Only Deena refuses to believe it’s true.

And then the letters start arriving. Letters from Mandy, claiming that their family’s blighted history is not just bad luck or bad decisions – but a curse, handed down through the generations. Mandy has gone in search of the curse’s roots, and now Deena must find her. What they find will heal their family’s rotten past – or rip it apart forever.

There are stories that just grip you and crush you into tiny little pieces. All the Bad Apples was one of those stories for me.

All the Bad Apples is a force of its own. Combining contemporary and magical realism, its story weaves together intergenerational stories of the women of the Rys family – a long history deeply rooted and intertwined with Ireland’s own unspoken history of Catholic fundamentalism, discrimination, and institutional abuse.

All the Bad Apples tackles some of the toughest issues there is – homophobia, sexual abuse, and abortion to name a few – but it doesn’t pussyfoot. Fowley-Doyle addresses these issues in a very straightforward manner, her words sharply honed to get to the very core of things. This fitted the story and helped propel her narrative on the right ground.

“This novel was, in part, fueled by rage,” Moïra Fowley-Doyle wrote in her author’s note, and, indeed, rage was a palpable and dominant emotion throughout the whole story. It was hard not to feel fist-clenchingly angry with what all the women – not just the Rys’ – went through in this story.

It was not just anger that I felt though.

This book dragged me through a whole range of emotions, back and forth several times over. I felt disgusted at the way men objectified and used women, treating them like objects that can be discarded at any time they pleased; felt sadness and betrayal when families turned their backs on daughters because they don’t conform to their notion of right and normal; shame at the righteousness of the people who deemed themselves the interpreters of God’s word and will – more so because, like them, I’m also Catholic.

But at the end of it all, hope. 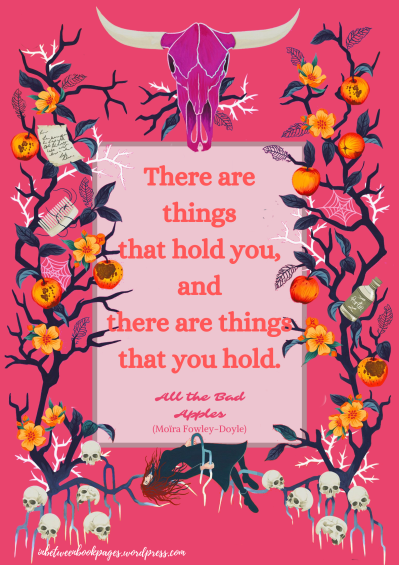 The ending definitely was a satisfying one, having gone through a rollercoaster of emotions to get to it. Fowley-Doyle definitely succeeded in making readers feel what her characters feel, using Deena as a touchpoint through which her audience experienced her fictional piece of the world.

All the Bad Apples is a powerful story. Though the characters and places are fictional, the history peppered throughout the pages of this novel has happened to real people. This is one book that should be read by everyone.

MOÏRA FOWLEY-DOYLE is half-French, half-Irish and made of equal parts feminism, whimsy, and Doc Martens. She lives in Dublin where she writes magic realism, reads tarot cards and raises witch babies.

Moïra’s first novel, The Accident Season, was shortlisted for the 2015 Waterstones Children’s Book Prize & the North East Teen Book Awards, nominated for the Carnegie Medal & won the inaugural School Library Association of Ireland Great Reads Award. It received two starred reviews & sold in ten territories. Her second novel, Spellbook of the Lost and Found, was published in summer 2017, received a starred review from School Library Journal and was shortlisted for the Irish Book Awards.

Win one (1) of three (3) copies of All the Bad Apples by Moïra Fowley-Doyle. Open to UK/Ireland only. 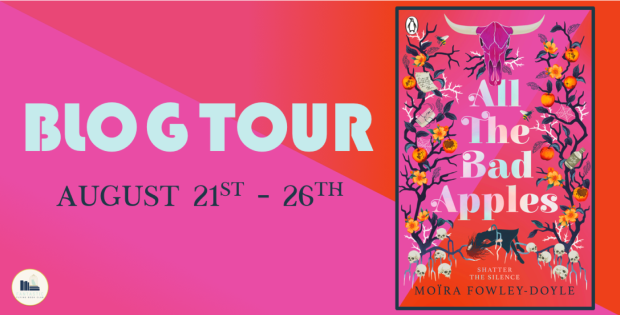 2 thoughts on “Review: “All the Bad Apples” by Moïra Fowley-Doyle”

1st of my @bbwbooksph haul ❤
Quarantine reads.
Came in almost an hour early to work. Going to fit in some reading.
Today is release for this beauty!
Just some last minute checks on my notes before I start writing my review. A Thousand Fires deals with some pretty heavy stuff & I'm still processing it.
@shamimsarif's YA debut is an action-packed spy thriller with the strength & depth of female bonds at its heart