Summit Entertainment will be premiering the full theatrical trailer of the Divergent movie tomorrow. They already have the countdown thing going on over at Summit’s YouTube page. But while we all wait for that, here are the movie posters and character portraits so far. 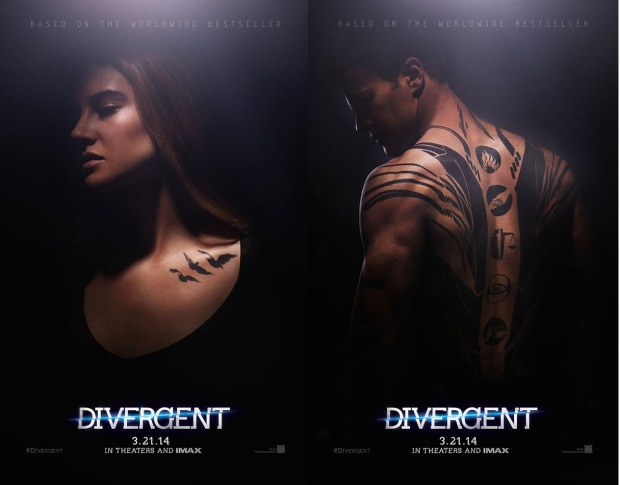 I think no one would disagree with me on this, The Hunger Games: Catching Fire is one of the most anticipated movies this year. I have excitedly fangirled every still from the movie, and now that we’re just six weeks away from seeing the film in its entirety, the hype just keeps on going.

I love soundtracks. Really. I even buy OSTs of movies I haven’t even seen. So, needless to say, aside the movie, I am also eagerly waiting for Catching Fire soundtrack. The complete tracklist was recently released and it includes some of my favorite artists and bands – Ellie Goulding, The Lumineers, The Nationals – they’re joining Coldplay, the first band to be confirmed for the said OST.

The Hunger Games: Catching Fire soundtrack is due to be released on November 19, two days before the movie. But you can already pre-order it on My Play Direct.

It has been a gloomy few days from my end of the world (if you didn’t know and if it isn’t obvious yet, I’m from the Philippines) and we’re all just starting to slowly go back to normalcy. Anyway, yesterday I was just surfing the net and found these clips for The Book Thief and Divergent. It’s always happy news when your favorite books are being turned into movies. It’s whole new media form. It brings the words I’ve read into life.

Of course, fans have been hearing a lot about the Divergent movie. This Sunday they’ll see more as the first clip for the adaptation of Veronica Roth’s debut novel premieres at the 2013 MTV Video Music Awards. There is, as if we’re not already excited, a short teaser of some sort on MTV’s site. The Divergent movie directed by Neil Burger will hit theaters March 21st next year.

Oh, yes! Allegiant is now being printed and Katherine Tegen posted this photo on Tumblr. What’s more, we now have a full back description. Here it goes:

The faction-based society that Tris Prior once believed in is shattered—fractured by violence and power struggles and scarred by loss and betrayal. So when offered a chance to explore the world past the limits she’s known, Tris is ready. Perhaps beyond the fence, she and Tobias will find a simple new life together, free from complicated lies, tangled loyalties, and painful memories.

But Tris’s new reality is even more alarming than the one she left behind. Old discoveries are quickly rendered meaningless. Explosive new truths change the hearts of those she loves. And once again, Tris must battle to comprehend the complexities of human nature—and of herself—while facing impossible choices about courage, allegiance, sacrifice, and love.

Told from a riveting dual perspective, Allegiant, by #1 New York Times best-selling author Veronica Roth, brings the Divergent series to a powerful conclusion while revealing the secrets of the dystopian world that has captivated millions of readers in Divergent and Insurgent.

Author Veronica Roth recently announced during the Divergent movie panel at Comic-Con that Allegiant will be told from both Tris and Tobias’s perspective. Allegiant, the last book in the Divergent trilogy, will be released on October 22. Meanwhile, the first of the four “Four” e-shorts titled The Transfer will be out next month on the 24th. Also, also, voting for Four’s voice (Allegiant audio book) will end soon. Harper Audio has something for the voters, so go VOTE.  And if it helps, below is the four auditions for Four’s voice from Soundcloud.

It’s been a good couple of months for Divergentland. Aren’t you guys excited? I know I am.