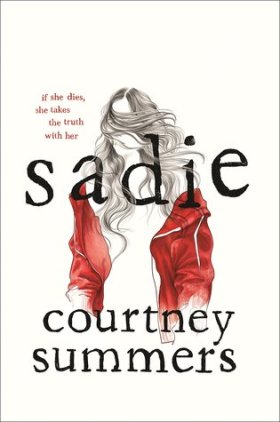 Being both a fan of true crime stories and Serial, I was naturally excited for this novel. Add to that the buzz it’s been receiving and you got me setting my expectations high, which is something I’m wary of because half the time I end up being disappointed in the book.

But Sadie more than held up.

Sadie centers on 19-year old Sadie Hunter’s quest to find her sister’s killer and the subsequent search for her by radio personality West McCray.

Abandoned by their drug-addicted mother when she was sixteen, Sadie is left alone to fend for herself and raise her younger sister, Mattie. Sadie makes Mattie her purpose, taking every thing the young girl throws at her, so when Mattie is found dead, Sadie makes it her mission to hunt her sister’s murderer.

Sadie hadn’t had an easy life. Growing up on her own, she’s been raising her sister Mattie in an isolated small town, trying her best to provide a normal life and keep their heads above water.

But when Mattie is found dead, Sadie’s entire world crumbles. After a somewhat botched police investigation, Sadie is determined to bring her sister’s killer to justice and hits the road following a few meager clues to find him.

When West McCray—a radio personality working on a segment about small, forgotten towns in America—overhears Sadie’s story at a local gas station, he becomes obsessed with finding the missing girl. He starts his own podcast as he tracks Sadie’s journey, trying to figure out what happened, hoping to find her before it’s too late.

I love this book! But let me warn you, Sadie is unapologetically dark and raw. Courtney Summers pulls no punches with this one, trust me.

Sadie will reel you in from its first word down to its last. It unfolds bit by bit, chapter after chapter, going back and forth between McCray’s podcast transcripts from The Girls set five months after Sadie’s disappearance and the titular main character’s first-person perspective set immediately after she leaves her small town to begin her search.

It was the perfect way to tell the story.

It may be off-putting for some, but I cannot imagine having this particular story told another way. I loved reading both the podcast transcripts and Sadie’s POV in equal measures. The alternating chapters, a modified before and after trade-off, flawlessly moved the narrative at the right pace, revealing enough of the story to keep readers guessing but not too much that it spoils the whole thing.

Another thing I loved is the writing. Courtney Summers is no stranger to writing hard topic books, just take All the Rage as an example. Summers’ writing is sharp and on point, and she created a realistic, complicated, very human protagonist in Sadie Hunter. I can’t help feeling for her – sad at what she has been through and angry at what has been done to her. Then, there’s West McCray – a reluctant character who becomes more and more invested as he gets to know Sadie through the eyes of the people who knew and loved and her. West’s search for Sadie mirrors Sadie’s search for her sister’s murderer, and I think writing the these two characters’ narrative this way will give readers a broader view of the story.

Still, Sadie’s boundless love for Mattie is the heart of this story. Even though she starts out the determined to avenge her sister’s death, the depth of Sadie’s love, and the grief and the guilt she feels for her sister stands out.

Sadie will break you and make you care. It will keep you turning the page until you reach the end. Comparable to Laurie Halse Anderson’s Speak and Louise O’Neill’s Asking for It, Sadie will open up discussions about the realities of life that are hard to talk about. I definitely recommend this to everyone.

1st of my @bbwbooksph haul ❤
Quarantine reads.
Came in almost an hour early to work. Going to fit in some reading.
Today is release for this beauty!
Just some last minute checks on my notes before I start writing my review. A Thousand Fires deals with some pretty heavy stuff & I'm still processing it.
@shamimsarif's YA debut is an action-packed spy thriller with the strength & depth of female bonds at its heart