Hey there! Happy midweek and welcome to another edition of Can’t-Wait Wednesday! Today I’m going to be featuring a book that I wished was published when I was still in school. 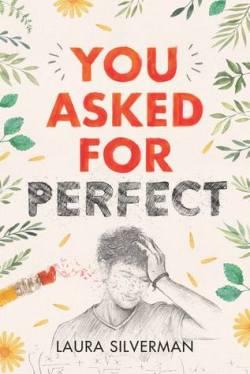 Senior Ariel Stone is the perfect college applicant: first chair violin, dedicated community volunteer, and expected valedictorian. He works hard – really hard – to make his life look effortless. A failed Calculus quiz is not part of that plan. Not when he’s number one. Not when his peers can smell weakness like a freshman’s body spray.

Figuring a few all-nighters will preserve his class rank, Ariel throws himself into studying. His friends will understand if he skips a few plans, and he can sleep when he graduates. Except Ariel’s grade continues to slide. Reluctantly, he gets a tutor. Amir and Ariel have never gotten along, but Amir excels in Calculus, and Ariel is out of options.

I’m pretty excited to have this book to read ahead of its release. You Asked for Perfect discusses the pressures of academic life – keeping your grades up, gaining the approval and acceptance of your peers – all things most students (former students) struggled with at one point or another. I did, several times, and to see a book tackle this issue means a lot. I wished this book existed when I was a student.

I’m again taking part in a blog tour for this wonderful book courtesy of the lovely gals at The Fantastic Flying Book Club . My stop is on the 16th, but please do check out the blog schedule below and check out the rest of the participating book bloggers.

ARC provided by publisher through Edelweiss.

Boarding school mystery with a sci-fi twist. Rebecca Hanover’s debut and series opener delves into a future world, one where clones and cloning exist.

When six clones join Emmaline’s prestigious boarding school, she must confront the heartbreak of seeing her dead best friend’s face each day in class.

The Similars are all anyone can talk about at the elite Darkwood Academy. Who are these six clones? What are the odds that all of them would be Darkwood students? Who is the madman who broke the law to create them? Emma couldn’t care less. Her best friend, Oliver, died over the summer and all she can think about is how to get through her junior year without him. Then she comes face-to-heartbreaking-face with Levi—Oliver’s exact DNA replica and one of the Similars.

Emma wants nothing to do with the Similars, but she keeps getting pulled deeper and deeper into their clique, uncovering dark truths about the clones and her prestigious school along the way. But no one can be trusted…not even the boy she is falling for who has Oliver’s face.

I don’t remember exactly when I requested for this book, but I do remember reading the summary and being instantly hooked. Clones? You got me! Ethically, the issue of cloning is a dubious one, but it was fascinating, the thought of a world where clones existed.

With the hook of its contemporaries and none of the bite, The Similars fails to make good on what could have been a complex and intriguing plot. It wasn’t really the writing that threw me off because that aspect of this book was okay. The execution, however, was a different story.

There were just too many things happening all at the same time: there’s Emmaline, the main character, still reeling from grief after her best friend Oliver died from an apparent suicide, then the arrival of the six clones, The Similars as they were collective called, at Emma’s school Darkwood Academy, then there’s also The Ten, the anti-clone movement, dubious school administrators with hidden agendas, a mysterious benefactor, a message from beyond the grave. It was just one subplot after another subplot after another subplot. Of course, it’s possible to tackle all of these in a single book, but it just wasn’t handled well in this one. The storytelling felt disjointed and repetitive, and suspending my disbelief felt harder the deeper I delve into this book.

The big cast of characters also didn’t help The Similars‘ case. An over-the-top, one-track villain, an underdeveloped love pairing, the characters were shallowly drawn and poorly utilized. The characters themselves were, for lack of a better word, forgettable. I didn’t get to know much of the many characters who ran around the pages of this book and because of that, without forming any attachment to anyone, I just didn’t care about what happened to any of them.

Overall, though The Similars did have some parts that I enjoyed, this one just didn’t work for me. The fast-paced narrative may draw in readers into this book, and I definitely could see some even sticking through with this series because of that  cliffhanger of an ending, which is great, but, just being honest, this is it for me for this series. There are other books, other trilogies and series that worthy of my time.

REBECCA HANOVER is a young adult author and television writer. She earned a bachelor of arts from Stanford University in English and drama and won an Emmy in 2008 as a staff writer on the CBS daytime drama Guiding Light. Her debut novel The Similars is a BookExpo 2018 Editor’s Buzz Pick.

Rebecca lives in San Francisco with her husband and two son, where she enjoys matcha lattes, hoodies, and complete lack of seasons. She aspires to attend an actual hot Pilates class one day.