ARC provided by publisher through NetGalley.

Two girls caught between feuding twin gods reclaim their lives in this reconstruction of the Greek Atalanta myth by debut author Elizabeth Tammi.

The Huntresses of Artemis must obey two rules: never disobey the goddess, and never fall in love. After being rescued from a harrowing life as an Oracle of Delphi, Kahina is glad to be a part of the Hunt; living among a group of female warriors gives her a chance to reclaim her strength, even while her prophetic powers linger. But when a routine mission goes awry, Kahina breaks the first rule in order to save the legendary huntress Atalanta.

To earn back Artemis’s favor, Kahina must complete a dangerous task in the kingdom of Arkadia— where the king’s daughter is revealed to be none other than Atalanta. Still reeling from her disastrous quest and her father’s insistence on marriage, Atalanta isn’t sure what to make of Kahina. As her connection to Atalanta deepens, Kahina finds herself in danger of breaking Artemis’ second rule.

She helps Atalanta devise a dangerous game to avoid marriage, and word spreads throughout Greece, attracting suitors willing to tempt fate to go up against Atalanta in a race for her hand. But when the men responsible for both the girls’ dark pasts arrive, the game turns deadly.

Growing up, I was a huge Greek mythology nerd, so I have a bit of a background, you could call it, on how the original myth goes. Basically, Atalanta, having participated in the Calydonian boar hunt, was rediscovered by her king father. He wanted to marry her off, but Atalanta doesn’t want to get married so she challenges her suitors to a footrace promising to marry any man who beats her. All goes well, with Atalanta remaining unbeaten until, lo and behold, Hippomenes, aided by Aphrodite (I swear these gods have nothing better to do other than meddle with humans) comes along, tricks her with some shiny golden apples, wins and marries her. The end. (Well, not really. The two go on and offend some other god, then are turned into a pair of lions as punishment. But you you don’t need to know that, so I’ll just stop there.)

This sticks to that storyline. Well, for the most part at least.

Outrun the Wind is more like a reconstruction of Atalanta’s myth with an ending that, personally speaking, makes more sense than the original story. Adding her own original characters and twists while still using the old Greek legend as foundation, debut author Elizabeth Tammi did not compromise her main characters’ – Atalanta’s and Kahina’s – core desires, and this is one of the things I appreciate the most in this story.

However, there were just a few points this book missed hitting.

The story mainly follows Atalanta and Kahina, a huntress of the goddess Artemis. Both character are easy to relate with, their struggles – being limited by the binds of convention – still resonating to many other young women in the real, modern world. As relatable as the two characters are though, I felt that they could have been explored more. It was hard to understand how they felt, what they’re thinking when they are so closed off. There was also this major shift in Atalanta’s character around the first third of the story. Gone was the fierce girl who wanted to prove herself, replaced by a defeated cut-out of her. It was an understandable change, but it just felt abrupt for me.

Another issue I had with this book is pacing. The opening chapter was awesome! The fight with the Calydonian Boar – the classic Greek hero quest – just draws you in, but the pace starts sagging right after Meleager’s death. It doesn’t pick up until the final showdown between the twin gods Apollo and Artemis, which is almost to the end of the story. I just kept on waiting for something to happen in between Atalanta’s escape from Artemis and her huntresses, and the footrace for her hand in marriage, but nothing. It just dragged on, with only a few bits thrown here and there to keep readers’ interest from completely waning.

The writing also took me out of the story. There was so much telling and not enough showing. It was so hard to get into when, on top of the story moving at a snail’s pace, you have to try so hard to make the world pop out of the words of the author. This frustrated me so much that by the time I finally finished all I felt was relief – relief that I’m finally done with it – which is, for me, not a good sign.

That said, I did enjoy Kahina and Atalanta’s relationship. It was slowburn, from enemies to reluctant allies to friends to lovers. It was obvious from the very start of the story that the two characters had a connection, but it was especially satisfying to read their progress and watch them grow closer and closer.

I can’t say the same for the rest of the book though.

Outrun the Wind was a promising story, but, sadly, that’s just what it is. Fans of re-tellings and Greek mythology may still find this enjoying. This just wasn’t for me.

ELIZABETH TAMMI was born in California and grew up in Florida, but is currently double-majoring in Creative Writing and Journalism as an undergraduate at Mercer University in Georgia. When she’s not writing, you can probably find Elizabeth at rehearsal for one of her vocal ensembles, or at work for her university’s newspaper and literary magazine. Her other interests include traveling, caffeinated beverages, and mythology. Outrun the Wind is her debut novel. 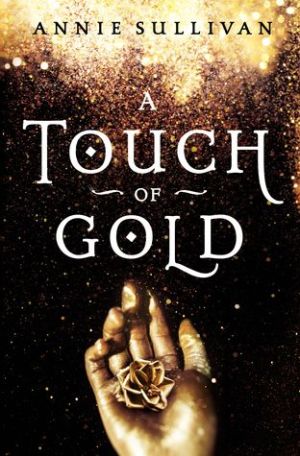 Title: A Touch of Gold

Get it: IndieBound | Book Depository | Barnes and Noble | Amazon | Books-a-Million

(Digital ARC graciously provided by the publisher via Edelweiss)

The story about King Midas’ golden touch was one of the most memorable stories I’ve learned when I was a child. It was a warning against greed and its consequences when you let it take over you. The end of King Midas’ story was pretty much a done deal, one where you could easily imagine him living a happy and contented life with his daughter after having learned his lesson.

Annie Sullivan, however, breaks open that ending to bring forth an entertaining expansion of the old tale in her debut novel A Touch of Gold.

King Midas once had the ability to turn all he touched into gold. But after his gift—or curse—almost killed his daughter, Midas relinquished The Touch forever. Ten years later, Princess Kora still bears the consequences of her father’s wish: her skin shines golden, rumors follow her everywhere she goes, and she harbors secret powers that are getting harder to hide.

Kora spends her days locked in the palace, concealed behind gloves and veils, trying to ignore the stares and gossip of courtiers. It isn’t until a charming young duke arrives that Kora realizes there may be someone out there who doesn’t fear her or her curse. But their courtship is disrupted when a thief steals precious items from the kingdom, leaving the treasury depleted and King Midas vulnerable. Thanks to her unique ability to sense gold, Kora is the only one who can track the thief down. As she sails off on her quest, Kora learns that not everything is what it seems—not thieves, not pirates, and not even curses. She quickly discovers that gold—and the power it brings—is more dangerous than she’d ever believed.

Midas learned his lesson at a price. What will Kora’s journey cost?

I had a hard time deciding what I really think and feel about this book. I did like it – the thought of a book about King Midas’ daughter was an intriguing concept – but somehow it just missed the mark and settled for ‘good’ instead of ‘great.’

A Touch of Gold continues King Midas’ story, putting his daughter, Princess Kora, at the center of things in a creatively expanded world built upon the original myth. Featuring cursed royals, pirates, sirens, a quest to retrieve stolen treasures, deception and betrayal, the book is an adventurous, twisty read.

It starts out strong, opening the story with an attention-grabbing prologue. It has me eating it up. Then, the problems started to trickle in. The first half of the story moved too slowly especially for a standalone.

The story’s secondary characters, meanwhile, annoyed and bothered me. Hettie, Kora’s cousin, got on my nerves. She made getting into the already dragged out first part even harder with all her whinnying and complaining. I seriously wanted to reach into the story and hit her with a pillow (or something). The insta-love between Kora and Aris, the Duke of Wystlinos quickly made me wary, though, this one I understand for reasons I will later explain.

Still, I powered through, and was rewarded when I reached the last half.

Action-filled and twisty up to the end, the last half of this book definitely held the story’s most interesting parts. Pirates! Sea adventure! Fighting off sirens intent to drown you! Who could resist those?!? I definitely couldn’t. Even this, though I enjoyed it, is a little bit problematic. It was rushed and predictable. There were key parts that could have been explored better, like Aris’ betrayal and the immediate shift of Kora’s affection from Aris to Royce.

One thing I can’t fault this book for, though, is Kora’s character growth. Cloistered inside her father’s palace, only getting glimpses of the outside world through her books, Kora has grown full of fear and insecurity. She is scared of hurting people with her strange growing powers, scared of scaring other people away, and, most especially, she is scared of herself. Just like her father, she has let the curse define her and this is a blow to her self-worth, so when someone, a stranger practically, comes around and tells her all these nice things, she falls for it and later pays the price for her naivety.

But she admits her mistakes and, more, she learns from them. Kora starts to trust herself bit by bit as her quest to retrieve her father’s gold progressed, and by the end of the book, she willingly accepts the challenge of becoming the princess her kingdom needs her to be – a capable ruler who has her own agency.

Overall, A Touch of Gold was an interesting and enjoyable read so full of action and adventure. It just wasn’t compelling or engaging enough for me. I’d still recommend you guys give this a try especially if you’re craving for a pirate story with a bit of magic.